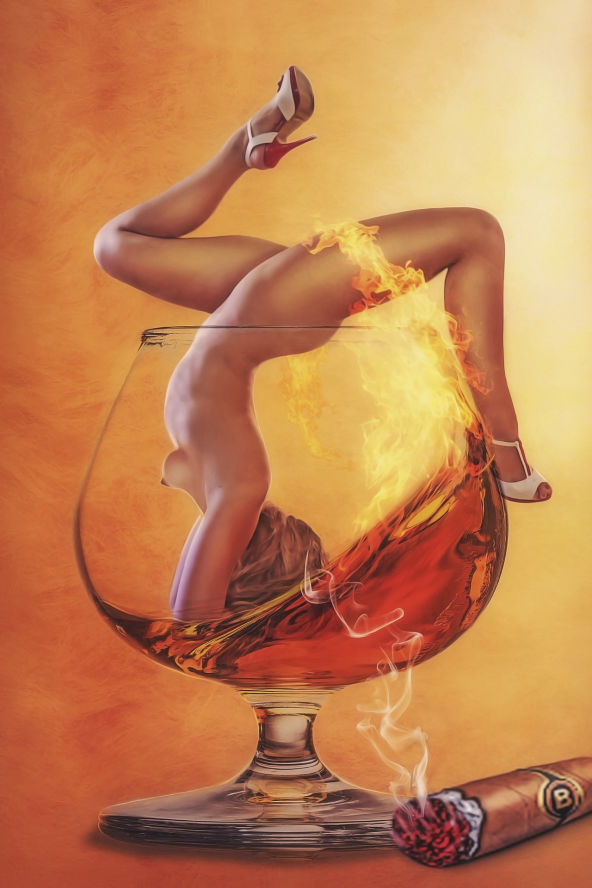 The Proper Way to Smoke a Cigar

When you're ready to light up a fine cigar, there are a few things to consider for maximizing the pleasure derived from your favorite puros. The first thing to consider is should you remove the cigar band, or leave it on? Old English etiquette says you should remove it before smoking, but that subject is open to much debate. Many cigar aficionados prefer to leave the band on so others can see what they're smoking, and vice-versa. The band can become the start of many conversations. Personally, I prefer to leave it on for a while after lighting it, and then remove it. This gives others time to see what I'm smoking, but more importantly, it allows the glue on the band to heat up, so it's easier to remove with the risk of tearing the cigar's wrapper.

When it comes to lighting your cigar, only use a butane lighter or wooden matches. Never use oil-based lighter fluids, candles or paper matches. Take your time and light the cigar gently, evenly and slowly. You'll want to hold the cigar at a 45° angle, and hold the flame underneath the end, in direct contact with the cigar. Then, slowly rotate the cigar until the end is evenly charred over the entire surface. Next, put the cigar in your mouth and hold the flame close to the end without letting the flame touch it. Draw on the cigar slowly while rotating it until it is evenly lit. Finally, gently blow on the glowing end to make sure it's burning evenly. The entire process will take about a minute, but it's better to take your time in the beginning so you can get the most out of your fine cigar.

Now it's time to smoke. The most important rule about smoking a fine cigar is to enjoy it. Take your time, savor your cigar, and think about the flavor. For an aficionado, enjoying the flavor of the cigar is like tasting a fine wine. Take long draws on your cigar so you can pull enough smoke onto the palate to expose all of its nuances. Strong draws will help your cigar burn evenly. Gently rolling the cigar in your fingers will also help insure an even burn. Hold the smoke in your mouth momentarily to let it circulate. This will allow the smoke to stimulate all areas of your palate. A well-balanced cigar will stimulate each area evenly. As you exhale and release the smoke, use the opportunity to bring your sense of smell into the equation. Remember, the nose has the majority of the flavor and odor receptors in the body. Much like fine wine and gourmet food, smell is a critical sense for cigar enjoyment. Don't let the smoke pass by your nose without enjoying the aroma. As you smoke, you'll build head of ash on the end of the cigar. Do not knock the ash off. Let the ash grow until it's ready to fall off in it's own time.

How long to smoke your cigar for is a matter of personal taste. The longer you smoke, the stronger the taste of the cigar will become, and the hotter it will burn. Some people prefer that stronger taste, and like to smoke the cigar until they can hardly hold it anymore. Others find that the taste becomes too harsh and/or bitter, and they prefer to stop smoking just past the halfway point. The only rule of thumb is to stop smoking the cigar when the taste becomes unpleasant to you. When its time to extinguish your cigar, set it in the ashtray and allow it to naturally extinguish itself. It's poor cigar etiquette to snuff out a cigar, as it will create an unpleasant odor for everyone around you.

Remember, they key to smoking a fine cigar is to relax, take your time, and savor the experience.

"A cigar ought not to be smoked solely with the mouth,
but with the hand, the eyes, and with the spirit."

Subscribe to our newsletter to get our news delivered to your inbox, without spam!